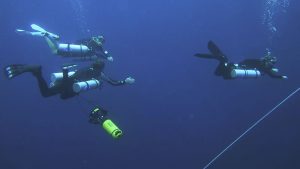 Sidemount Diving with Garry Dallas  – It’s not debatable that most of the dive guides are so passionate about the nature, that they had located their work in it, around it. Specifically shaped to fit in it. We observe the majestic work and the fertile chaos that permeates this so different environment, astonished by the numbers, the colors and the playing of these creatures that so often people forget. Like from another world, not part of our everyday lives.

That’s our passion… guiding the interested people to see with their very eyes the grace and the frenzy of the animals in the wild oceans, the magnificent constructions that the meeting between rocks and water can create. Nicely and safe. And of course we love our job.

But what happen when you have worked in this field for 11 years and you’ve passed the 9000 thousand dives on your shoulders, between Portugal, South Africa, Mozambique and Thailand?

The good thing about being a scuba diver, nowadays, is that it’s almost impossible to stop learning and that there are a lot of small things related to scuba diving that can trigger our curiosity… we have an amount of possibilities, gears, techniques and different environments far to be fully seen or learned in 2 or 3 scuba divers lives.

And so, after lots of experiences, Ricardo, MV Giamani’s tour leader, was struggling to find someone special to teach him sidemount diving properly, different ways to be a diver: a sidemount diver and a tec diver.

Oversimplifying: the first about carrying the tank(s) attached to the side of your body from the armpit to the waist, instead of being strapped on the back… and the second about doing dives that involve decompression stops to de-saturate the high amount of nitrogen absorbed in our body tissues.

Having already tried both, in the past… he was aware about the difficulties of skipping some details and to not be correctly trained, understanding at full what every single skill and step of it, means. He was looking for someone at the top, in his field. Someone well known for his reputation and professionalism.

Garry Dallas came out of the bucket after a brainstorming of about one month, like the most suitable person for the job.

Sorting out the details was only a matter of time and the sidemount diving course was organized. The thrill, perceivable, in the salty air on the boat, when the booking and the dates were confirmed.

The day which they met, Ricardo took care of all his duties of tour leader of MV Giamani and then started a furious unstoppable chat with Garry, and his girlfriend and dive master: Samantha Raby. They started on the spot to plan the schedule of the next four days and to talk about a never ending series of details, adjustments, reasons behind choices, skills and manoeuvres.

Ricardo was curious, Garry was more than willing to talk about his experience and all the preparatory details of the RAID courses that soon he’ll had to teach him. They finished the conversation around 3 o’clock in the morning. Just to have at least a few hours of sleep before the first, official, course’s dive.

The next days were intense for the three of them, practicing in the water, briefing and debriefing outside… from the adjustments to the particular harnesses of the sidemount setup that needs to be done correctly and is based on the specifics of the body of the diver. And then also the setup of the regulators, first stages, hoses path, bungee cords… to all the skills needed to dive correctly and safely with this setup: safety drills, regulator switching, tank clipping and unclipping and adjustments of their positions, air sharing in case of emergency and so on. It’s a proper new way to dive. Definitely interesting and with an “enhanced safety concept” as cornerstone, having the possibility to take with you two, or more, independent breathing systems.

Almost every day they reached the crazy amount of 300 minutes underwater, practicing… having fun with it… but also enjoying the amazing scenarios offered by Similan and Surin National Parks’s dive sites.

Was not rare to see them surfacing with large smiles after having an encounter with eagle rays, leopard shark at uncommon depths (37 meters in Richelieu Rock), manta rays or simply making a “sandy bottom climbing race against the current”, digging with the hands in the sand and pulling themselves against a strong down-current, around 40 meters in Koh Tachai.

They finalized the trip doing also the OC Deco 40m/132 feet RAID Specialty, a tec course about diving with decompression stops to maximum 40 meters deep and with deco stops of maximum 10 minutes in air or nitrox. And playing around on the MV Seacharter wreck with our Diver Propulsion Vehicle (DPV) too!

Diving is fun, never forget that!

During their usual recreational dives all the guests on board MV Giamani had enjoyed the mood and were curious about the setup, the stories and some special tricks that Garry taught us about sidemount diving.

And these three guys coming out of nowhere, perfectly trimmed, performing skills had often caught the attention of many divers, from every boat around, that just stared at them hypnotized. Sometimes even a little bit scared during the toughest emergency procedures practice which included no mask, free flowing Regulator and out of air situation all together.

But after completing their duties and received the amazed stares of the public they were back to their dive, like everybody else, looking at the spectacular marine life all around us.

The trip is finished. The courses have been completed. It was a great experience for everyone… a step further in our path about the passion of diving. Now many others will benefit of Ricardo’s new training and we hope to teach to lots of divers new skills and mindsets, glad to have always new challenges.