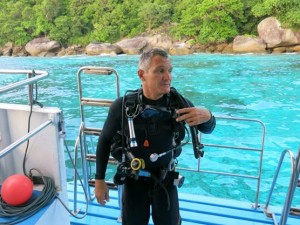 The dive started off like thousands of others, with a slow descent through clear waters onto the reef. It swiftly veered into the unexpected with the sudden raining down of four dive weights as a customer’s weight pockets malfunctioned. Nearly missing taking a couple on the head, the dive leader quickly looked up, saw that the weightless diver had abandoned her efforts to get down and, verifying that the boat was still at the drop-off point, started to head down to join the rest of his group of divers who had already descended to around 25m, all while preparing a safety sausage for release from the bottom. Ricardo, tour leader and dive instructor on the Giamani, was able to do this because 1) he knew his team on the boat and that they would take care of the diver at the surface 2) he was already prepared for this kind of contingency and could instantly deal with the situation before it became a problem.

This extensive knowledge only comes from long experience, the kind obtained first-hand from a lifetime spent near the ocean. Ricardo can be seen as coming from the old school of adventurers, not purposely looking for life in exotic, far-flung destinations but finding himself there as a result of his passion for all sports, aquatic ones in particular, and from incidents such as having been stranded several times out in the Atlantic Ocean while windsurfing as a teen – the first time for 36 hours, the second time for 12 and the third time for only two after his exasperated and worried father finally got him an emergency signalling device! These occurrences didn’t put him off in the slightest but did nurture a deep respect in him for the true nature of the ocean.

He first found himself diving underwater at the age of 13 the way the first pioneers used to do it, by just strapping a tank on his back, going down and heeding the basic instructions he was given to not hold his breath while coming up. Literally going wherever the wind took him, he was able to travel the world doing what he loved by being sponsored in windsurfing championships.

After earning a degree in sports education, Ricardo managed to meld these first experiences into job opportunities, which ranged from organising corporate team-building adventures in 4x4s to promoting sports on behalf of his local municipality and opening a dive centre in an area without any pre-existing facilities. The only time he ended up donning a suit and tie in the morning was still to show up to work on a beach at a 5-star resort! Eventually, he ended up in the world’s southern tip working in some of the most famous spots for marine encounters: South Africa for great white sharks and sardine runs and Mozambique with its “wild” dives in Tofo where it is possible to see the big five of the underwater world on a daily basis: giant mantas, whalesharks, whales, dolphins and sharks. As for his time with the great whites, Ricardo was able to do what most would never dare as he learned how to free dive with them, training under world-renowned Michael Rutzen, aka Sharkman, who holds the distinction of having spent the most time with these awesome creatures outside of a cage. Working in Africa also gave Ricardo the precious ability of being able to fix almost all equipment problems – a necessity when spare parts would often take days or weeks to arrive.

Luckily for the Giamani, Ricardo found himself in Bangkok one day as part of a South African sports delegation and felt immediately at home in the country. He has since worked several seasons in the Phuket area, where he has been able to bring all his experience to bear to ensuring that divers safely enjoy their time underwater and to sharing his passion for the underwater world with them.

For example, he always has with him, as part of his standard equipment, two fluorescent yellow safety sausages, which are distinct from the majority of red SMBs around. One of them is connected to a reel with 50m of line. On any given dive, he often uses both, not just for safety reasons, but to ensure that everyone in his group can enjoy a comfortable dive and dive times. In the case first mentioned, by the time Ricardo joined his group on the bottom, the bright yellow tube was already bobbing on the surface and it was a simple matter for the diver, once again properly weighted, to follow the line down to Ricardo’s reel and the rest of the group for what turned out to be another great dive.

In spite of all his experiences, you won’t find Ricardo complacent about diving or garrulous about old dive stories. Rather, he’s focused on different divers’ individual needs and excited about the next dive. If you look through the Giamani’s guestbook, you’ll find such remarks as Ricardo is the “diver’s MacGyver” and the “God of Divemasters” but if you repeat such comments to him, you’ll even see that he’s capable of blushing.