Scuba Regulator –  The scuba diving regulator is singularly the most important piece of diving equipment you need, diving is impossible without some form of breathing device. The sheer amount of regulators on the market today is immense and can cause some confusion when a choosing one of your own.

Scuba Regulators are the one of the most expensive pieces of equipment you will ever buy when scuba diving. Dive computers and dry suits can also become very expensive at the top end range.

The scuba regulator is basically your life support while in an alien environment (underwater). It is advisable for the diver to buy the best one they can afford, especially when diving in cold or more difficult and stressful conditions than let’s say, in a warm water environment.

Diving regulators are designed in different ways, some are balanced some are unbalanced and some are over balanced.

Unbalanced are the cheapest ones and you will find these kinds of regulators are what most dive schools use around the world. They are the cheapest, but when dived within their limits are perfectly safe to use and all student divers at one point or another have used them with no problems. 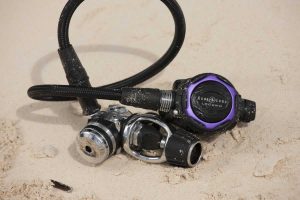 Balanced scuba regulators are more expensive and tend to work almost as well as when they are on the surface as they do when diving into a headlong current, or any stress situation which cause the divers to breathe more heavily.

An over balanced scuba regulator is a relatively new design and is made for divers that really expose themselves to trickier dives. These regulators not only offer the same amount of air they would give at the surface, they actually give more air when they are under duress, ensuring the diver has as much air as it is possible to give him.

A regulator consists of several parts. The first part being, the first stage, this piece is the bit that is attached to the scuba cylinder. The air from the cylinder enters the first stage and the pressure of this air form the cylinder is so great, that it would be impossible for the diver to breathe if it were not for the reducing effect that the first stage has.

Attached to the first stage are the hoses, one hose leads directly to the second stage, which is also called your primary regulator. This is the piece that fits snuggly into the diver’s mouth and allows him to breathe. There is another hose which also has another second stage attached to it. This second stage is usually brightly coloured with a longer hose. This is for the divers buddy, in case of an out of air situation.

There is also a high pressure hose attached to the 1st stage, this hose leads to several gauges, which tell the diver the air content inside the cylinder. It may have a depth gauge attached to the console and it may also have a computer and or a compass attached too.

Another which is attached to the 1st stage is the low pressure inflator hose. This hose leads directly to the BCD and allows the diver to inflate his buoyancy control device at will.

There are other ports on the 1st stage for other hoses, like another low pressure hose for a dry suit inflator or a high pressure port where it is possible to attach a transmitter for a dive computer.

Regardless of what you may have paid for your regulator, if you look after it, wash it after every diving session and get it serviced every year, whether you have used it or not. It should last you many, many years, if you do not look after your regulator and expect it to work properly after several years of negligence you may just find yourself in a regrettable position of not taking care of it – and you do not want a faulty regulator at thirty metre dive.

After every dive session or trip, make sure you wash the regulator with fresh water, make sure after drying it, the dusk cap is placed back on the 1 stage. Rinse the second stages thoroughly; most second stages come apart very easily indeed for this particular reason.

A scuba diving regulator is very very important piece of diving equipment; it is up to the owner to take care of it. Purchase the best one you can afford, taking care of it is paramount.

Buying a second hand one is not always a good idea, unless you know who has been using it. Take into consideration before handing over the cash, how old is it and where it has been used and when the last time is was serviced.