Scuba Diving Watches – Since the advent of the dive computer dive watches have slowly but surely ben disappearing from scuba divers wrists’.

Although many dive computers can also been used as a watch – mainly in digital format- very few divers wear the traditional timepiece any more. 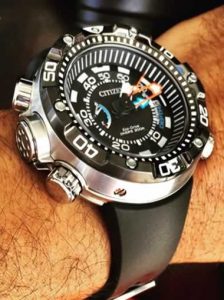 However that said, the big watch companies operating globally report a massive increase in diver watch sales. One cannot help think that James Bond has something to do with this increase in demand for these beautiful and expensive scuba diving timepieces.

007 rolling of the back of a dinghy on a moonless Caribbean evening, somewhere just outside of the Bahamas; one last check of his ridiculous expensive, all singing all dancing, laser firing, chic grabbing watch, and he descends into the depths of the warm Atlantic Ocean in search of another naughty criminal.

Dive watches are trendy, not amongst the diving community though as they seem to prefer the all in one dive computer, which is another story entirely.

Dive Watches through the years

Diving is a relatively new sport. We still refer back to those early days, although it may mean as far back as the sixties or seventies, which is hardly a millennium ago. The way that divers could track their time under water was to pull out the crown of the watch before descending down; they would set the minute hand to 12, push the crown back in a kick off down to the depths in search of treasure.

The rotating bezel introduced a far superior timepiece for divers. The diver would (some still use this method -not many though) twist the bezel so the arrow or marker aligns with the minute hand of the watch. As the dive time elapses, the minute hand is read against the bezel to easily tell the diver his bottom time.

Along with the other gauges he would use to track his depth and air consumption, and as long as he knew his no-deco limit, he could quite successfully complete the dive unhindered and in relative safety. The bezel was made so that it could move in a clock wise and anti-clockwise direction. This was soon enough figured that this was causing some divers so get bent (decompression sickness).

During scuba diving activities it is quite easy to bang and bump into things, equipment can and will get scratched, wetsuit can get ripped and bezels can move about, thus resulting in an inaccurate time reading. Therefore it was not long before the bezel could only move in one direction, thus resulting in even safer diving techniques and practices.

The answer in short is, Professional Technical divers do. When they are working at depths sometimes hundreds of metres deep, they don’t use normal air to breathe, it has to be mix with other gases and as helium is inert and not harmful to humans, it is used instead of nitrogen.

The helium molecules are very small indeed, when the diver’s starts to ascend, the helium bubbles that have gotten inside the watch from the exposure of helium inside the diving chamber expand, and will need to be released.

The helium will look for the easiest route out of the watch, and before the introduction of the release valve, the helium tended to blow the crystal (glass casing) off in order to escape. This of course was not safe for the ascending diver, the watch or anyone else around.

Fear not the dive watch is alive and well, and in fact thriving, albeit not in the diving world; computers rule there now. However Scuba Diving Watches are far cooler than any dive computer.

They have been around since Cousteau and Hans Hass went exploring wrecks and reefs back in the fifties, they are a legacy of a bygone era. When adventure and exploration of the seas was in its infancy, these men were pioneers of the dive industry we know today, and their watch was a symbol of their daring achievement’s underwater.