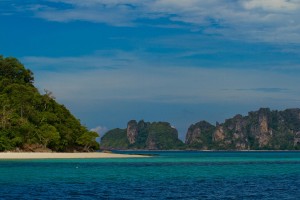 Phi Phi Diving Sites by Colona Liveaboards – The six islands that make up the famous Koh Phi Phi Island group have to been seen to be believed. Many people have images of their idyllic beach buried deep somewhere in their mind, which they like to fantasize a visit, especially on wet and windy days. Such days when you wish you were somewhere else, Phi Phi is just that place.

Phi Phi is a paradise Island, make no mistake about it. These islands are made up of sheer faced limestone walls, which are covered in lush green tropical forest. There are also many unspoilt and beautiful beaches to choose from.

Phi Phi, shot to fame in 2000 with the release of a movie starring Leonardo DiCaprio and Robert Carlyle, the movie, of course, is The Beach. The movie was shot on several locations around Thailand. Most of the attention however, was brought to the idyllic setting of Phi Phi; mainly Maya Bay.

The movie was about backpackers, drugs and sex in Thailand and was quite controversial at the time. Several high ranking politicians complained and wanted the movie banned, as it was deemed to give Thailand a bad name.

There were also several lawsuits regarding the production and the way Maya Bay was used during filming. Many local conservationists complained about the state Maya Bay was left in and filed lawsuit against Fox Movies.

The conservationists claimed that the recording of the movie damaged the natural environment of the bay and that it was never returned to its natural charm. There were funds set aside by Fox to reconstruct the beach and return it back to its natural setting.

All this and being the ideal back packer movie, naturally made it an instant hit, especially in Thailand, where backpackers have a wonderful time journeying through the Thai country and all it has to offer.

If the movie was not enough publicity for a little group of islands in southern Thailand, then what followed in December 2004 would be. Phi Phi became famous on a global scale, and all for the wrong reasons. The Boxing Day Tsunami, which decimated the coasts of many Indian Ocean countries, would go down in history as the worst natural disaster in living memory.

Phi Phi only a small Island took a massive hit from the big waves that day and left many many scars. The kind of scars that don’t always heal fully and many hearts that were broken will never truly be mended. However, the locals that who survived that day and still live and work on Phi Phi have made the best of a very bad situation.

Today you would not recognize the place, from that fateful day back in 2004. There is so much to do and see here these days. Come and see for yourself just what it is that Phi Phi has to offer you. Come and find your piece of paradise, it really is waiting for you.

The Islands are named: Bamboo, Mosquito, Bida Nai, Bida Nok, Phi Phi Leh and the main Island of Phi Phi Don. Phi Phi Don is the largest in the group and the only one which is inhabited. You will find Accommodation, Restaurants, Night Clubs, Bars, Shopping, Internet, Thai Massage and of course Scuba Diving.

There are nineteen Phi Phi Diving Sites mainly around Phi Phi Ley. These main dive sites make for fantastic diving for all levels, whether experienced or beginner.