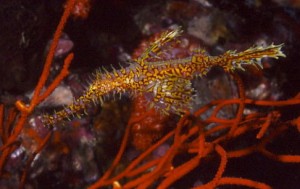 Ghost Pipefish are masters of disguise, some say that they have the best disguise in the seas, although personally that reputation must surely go to the Mimic Octopus, but that’s another story.

Recognized there are five members of the Ghost Pipe fish family. Although due to a lack of research this list is not conclusive and there may be more Ghost Pipefish out there that have not yet been documented.

All members of this family are quite small, and all have a similar body shape but they do differ considerably in colour and patterns of camouflage.
They are not easy to find, ask any Divemaster or diving instructor, they are elusive due to their exceptional camouflaged skills. Finding them even when they are known to be in a particular area can prove very challenging indeed.

Ghost pipe fish are not fish at all as they belong to the seahorse family, although distant cousins at that. Ghost Pipe Fish are slightly different to Pipefish and can be distinguished by having pelvic fins, a spiny dorsal fin and star shapes patterns on their skin. And unlike Genuine Pipefishes the female Ghost Pipefish use their pelvic fins to clutch their eggs.

Ghost Pipefishes, as I previously mentioned are amazing camouflage experts, and can look like floating leaves, they can also be confused easily with certain crinoids, as well as algae and sponges and of course sea-grass. This makes them even more popular amongst divers specially photographers and videographers.

Unlike seahorses, the Ghost Pipefish young are cared for by the female, whereas in young seahorses, it is the father that takes the leading role on protection. After being born they spend much of their early life floating around the sea as plankton until they reach maturity and they finally settle somewhere on a coral reef for protection.

Ghost pipefish are, as I have said, extremely difficult to find, and contrary to reports they are only visible on the reefs for a couple of months a year, usually when the water temperature is at it warmest. They make excellent models for any photographer as they don’t really move about much.

They also do not like to sit near strong currents and will hide away out of the way of the fast moving water in small areas such as sheltered spots and muck diving sites too.

Here in Thailand, amongst divers that come here to dive our wonderful and diverse coral reefs, very few understand just how difficult these creatures are to spot. Usually local dive guides will tell each other where the Ghost Pipefish is, although many keep their finds a secret.

I can tell you that actually spotting these beautiful creatures is even better by yourself, especially without any previous knowledge one is in the area, it is a wonderful feeling, up there with seeing a Manta Ray.

Ghost Pipefish will usually wait in an upside down position while feeding, waiting for its unassuming prey, which is then sucked up through its long snout. If you get lucky enough to observe their features, you will notice how similar they are to the mythical dragon. They tend to make their homes on the reef just away from the stronger currents, waiting for its prey to glide by in the current.

In most areas where Ghost Pipefish are present they can only be observed for a couple of months a year as they are only seasonal visitors. Where they go during this time is anyone’s guess. Happy Macro Hunting !

can you see it?