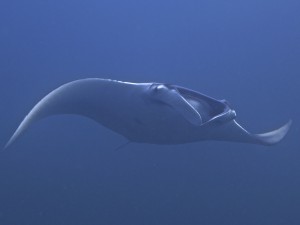 Manta Rays are one of the most popular fish that divers wish to see when they come to Thailand. Not only can they grow to huge proportions, they are also none aggressive and can be quite inquisitive too.

Manta Rays tend to like the nomadic lifestyle and are commonly found in warm tropical waters, they love to hover around deep water seamounts, which top out near the surface, feeding on the huge amounts of plankton that gather there.

The manta ray is not the solitary animal many believe it to be, they tend to gather in rather large groups at certain times of the year, especially when there is an abundance of food around -and females of course. There is a hierarchy in the order of things in Manta world.

Very often have I seen larger Mantas whether males or females, chase away and use what is threatening posture towards younger and smaller animals which are trying to move into their eatery.

In fact, with this posturing in mind, I strongly believe that I have also been victim to this rather bullying behavior, which by the way is consistent throughout the entire shark world (which incidentally Manta’s belonging too) – the largest animal in the area eats first.

During this dominant display, the Manta will approach the smaller animal very quickly flipping itself into a roll, which looks simply breathtaking and intimidating at the same time. They will also chase smaller mantas off the reef.

Manta Rays have a love for all things clean they love to frequent cleaning stations. These cleaning stations are manned usually by a crack team of cleaner wrasse and small angel fishes. These fishes swim directly up to the manta and pick away any small parasites and other growths that the manta has picked up on its travels across the oceans.

These little cleaning fish are in no danger from the manta or any other fish for that matter which use the cleaning stations, as they provide one of the most important roles on the reef. Their role is to rid these and other fishes on the reef of parasites and dead tissue.

Mantas are part of the Ray family, which is also part of the cartilaginous family of fishes; unlike many sharks they have no teeth. So to eat they must sieve the food particles out of the water using rows of tiny plates in their mouths.

This food is called plankton and is the most abundant food source in the oceans which includes microscopic plankton, small fish and crustaceans.
Even though the Manta can grow to huge sizes, it does not make them in invulnerable to predators, quite often, have we seen where mantas have lost their tails in part or even completely.

Also I have seen many Mantas that have had bite marks on them and on some occasions they actually have large portions of their wings bitten off. Presumably by large sharks such as Tigers and Bull sharks, Oceanic White Tip and other large aggressive sharks.

Female Manta Rays carry their eggs till they hatch inside their womb. A process known as aplacental viviparity, this process is quite common in rays and sharks throughout their world. After hatching, the Female Manta Ray will finally give birth to one or two young about six months later, they grow very quickly.

Manta Ray numbers like most big marine creatures are on the decline, as they are susceptible to over fishing, pollution and of course man. Manta Rays are an absolute wonder to observe, there grace and inquisitive eye are there for everyone to see – well if you are lucky enough that is to see one up close.