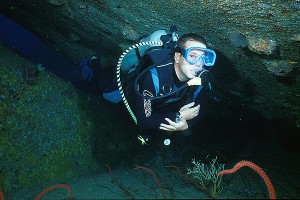 Elephant Head is a must for all Similan Diving Safaris. The dive site name that makes you wonder exactly what gas blend the divers were breathing when they named this sites in the Similan Islands.

It was named for the part of the site which breaks the surface, a series of rocks, when viewed from the northern side, these rock resemble, it was said, the head of an elephant as it is swimming (not the entire elephant as many books web sites and even dive guides will tell you). The most western rock is said to be the top of the head, as if the eyes are just below the waterline, the eastern rock is said to be the trunk looping out and back into the water and the central rock is the tip of the trunk breaking the surface.

This dive site is very much a boulder rather than a coral or fish dive, though there are plenty of both they are outweighed by the sheer majesty of the granite boulder formations which create many swim throughs, channels and valleys. Much of the dive site is at around 26 metres before coming up to the top of some of the smaller rocks at 12 metres and then onto the slope of the main ‘head’ rock which has a long horizontal crevice at 7 metres full of fish. On the deepest swim through at about 29 metres there’s often a White Tip Reef Shark resting and sometimes Leopard sharks.