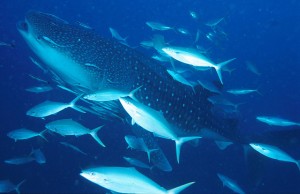 Whale Shark are the most popular fish requested on most scuba divers wish list when they come to Thailand for a liveaboard trip, is to see the huge harmless plankton eating colossus the Whaleshark.

You would expect that something so large would not be so difficult to find even underwater. The average size for this mega fish being around 6 metres (the largest ever reported in excess of 12 metres); alas there are divers with literally hundreds of dives who go their whole lives without seeing one.

The Whaleshark populates warm, tropical waters around the world; most sightings of this beast are seen on or very close to corals reefs, where divers play. However recent tagging has taken place and determined that the Whaleshark dives to depths of 500 metres and more. Just why the Whaleshark goes down this far, much like many ocean going animals, remains a mystery to man.

Due to sharks relatively slow sexual maturity rate, many of the species have been placed on the high risk charter by the WWF including unfortunately the Whaleshark. This magnificent fish, in Asia alone, is highly regarded for its fins, to make the shark fin soup. Other serious threats are pollution, disregarded fishing nets, and other general abuse by man.

Female Whalesharks incubate in their womb hundreds of eggs at a time, and when ready, these eggs hatch inside the mother, effectively meaning that she gives birth to live young.

Unfortunately, infant mortality rates are very high and out these several hundred baby sharks only a few will ever see adulthood. The remaining eggs are thought to be there so that when the whale shark pups hatch, they have something to eat. Whalesharks are thought to live from anywhere from sixty years to one hundred years old.

This year the southern dive sites of Thailand have seen a major increase in Whaleshark activity, not for at least ten years have there been so many sightings, it has been incredible. On several occasions three different Whalesharks have been seen at the same time on one dive site, this is unusual for Thai waters.

Whalesharks are plankton chasers and follow the current, which carry these tiny animals, and make up the majority of the Whalesharks dietary needs. If you are lucky enough to be on a dive site when one comes by, you may notice how it feeds. The mouth is enormous, some over five feet wide, easily swallowing a diver if it so wished.

They scoop up the plankton in its mouth and with special filters it swallows all the food and disregards the superfluous water out through its gills. They are a remarkable machine. I have met divers who only have four dives and they were lucky enough to have seen one on their first dive ever.

I have also met people who have been diving for years and have never seen one, but, to see one is the only real way to appreciate their immense size. Divers can get close to them, so close in fact be able to touch them. Usually these sharks don’t like too much human interaction and will soon swim off if the diver becomes annoying, spoiling the fun for everyone.

Like all marine animals, respect should be shown to theses endangered and beautiful wild creatures. Try to imagine for a minute, the miles they have travelled on their nomadic travels across our oceans and what stores they could tell.