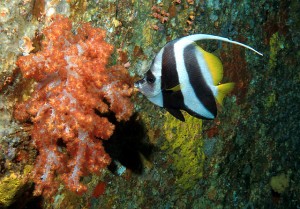 Banner Fish at West of Eden

This Similan Islands Diving site is on the west side of Similan #7 (Koh Payu). It’s name has two possible sources,on the east side of this island is a dive site (currently closed by the National Park) called East of Eden (which was named as the beautiful coral reef was compared to the Garden of Eden and the line from Milton’s Paradise Lost which became the title of a Steinbeck novel stated that the garden was planted in the East of Eden), the dive site on the west named much later and so if the east coast site is East of Eden the west coast site must be West of Eden.

The other stories that it was originally named by the first divers here West of Sweden (guess where the divers came from), geographically this is incorrect – but funny, then over the years west of Sweden became west of Eden due in some part to the sister site on the east coast of the island. The southern part of the dive site is known by many as squeaky rock due to one of the large granite boulders that breaks the surface moving due to tidal motion and makes an eerie creaking noise.

The dive site itself is two contrasting areas. The southern area stretching from the mooring to the southern tip of the island is a hard coral garden at between 8 and 12 metres. This garden is teeming with reef fish, Bat Fish close to the mooring, group of brown Parrot Fish constantly feeding, Moorish Idols and Banner Fish patrolling the reef and Trumpet fish hunting.

Head north and west from the mooring and you reach some massive boulders, there is some beautiful soft corals and sea fans around the base of these rocks between 20 and 30 metres,on top of these boulders are coral gardens made up of hard, soft and leather corals. Between the boulder are a number of channels where you have a chance of seeing mantis shrimp, nudibranchs and shrimp. Follow the rocks out into the deep to find a whip coral garden at 29metres, here you often see Ribbon Eels and Frog Fish.

One thing to be aware of on this site is Thermoclines, though the average water temperature is 28-30°C thermoclines as cold as 14°C have been encountered. This is believed to be the reason why the shallow corals are healthier here than else where as they have kept the water temperature down in the summer months.