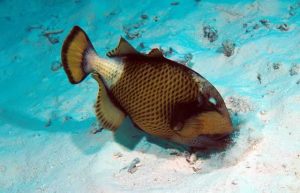 The Titan Trigger fish is the largest member of the Trigger fish family; they can reach almost a meter in length. This fish is disc shaped and is packed with solid muscle. The Titan usually is seen during the day while diving in Thailand, feeding on sea urchins, hard Corals, crustaceans and tube worms. They get their name from the dorsal fin which it points up whenever it is threatened or when it is sleeping, it then locks itself in between the rocks and crevices for safety.

These strange behaving fish are seen on almost every reef dive in Thailand, they are quite easy to spot too. They feed by blowing water into the sand, removing old pieces of coral from the sand and chomping on it, looking for hidden worms. They are usually followed by a small group of other fish like wrasse and other smaller fish, who hope to take advantage of the titan’s feeding maneuvers.

The Titan Trigger Fish coloration is a dirty yellow body, rimmed by black around its relatively small fins. Its eyes can move around independently from one another, they actually look like they have veins in the eyes. They will feed stood on their heads while chomping at anything that they think will offer food.

They love nothing better to get their teeth into the long spiny sea urchins that litter the bottom of many dive site here in Thailand. If you have ever touched one of these sea urchins, you will know just how sharp their spines are, they are just like hypodermic needles. This does not bother the trigger in the slightest. And once they have chosen their target nothing will stop it from its goal, nothing. 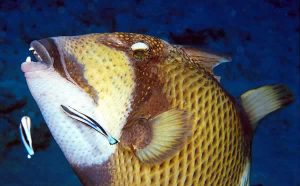 Normally they do not care too much about divers, unless you get too close to them when they are feeding, they will spin their eyes at you, either carry on chomping on the delicate reef or just swim away. They are a solitary fish, but on the odd occasion you may see a couple of them together. Possibly just before or after mating. If a smaller trigger fish comes into its territory it will vigorously chase it away.

As mentioned, Titan Trigger Fish tend not to be too bothered around divers unless, and this is a big unless, they are sat on their nest guarding their young, then its hammer-time. Titan Triggers will chase anything out of its area; absolutely anything. They have no fear when it comes to defending their area.

Their nests are built on the sandy bottom, usually made up of odd pieces of dead coral and small rocks. Once built, they sit directly over the nest and the territory above is their domain. Anything that comes near it will be attacked.

Many scuba divers do come a cropper with these crazy fish, the last thing on a divers mind is to rummage around a Titans’ nest, but the Titan does not see it that way. There domain is, if you like, an inverted cone stretching to the surface.

I have been attacked several times once or twice by two of these mad fish at the same time, they tend to nest close to each other, so be wary, stay behind the Divemaster and let him deal with them is my advice.

Titan trigger fish fertilize their eggs externally in their new nest, during their courtship, they will do a mating dance before copulation. Once the eggs have been laid and fertilized the female will guard the nest with her life, they normally spawned for a few days most months and once the small titans have hatched they will make a break for it towards the sanctity of the nearest reef. Here they will live of tiny zooplankton until they are large enough to chomp on the reef and abuse divers themselves.