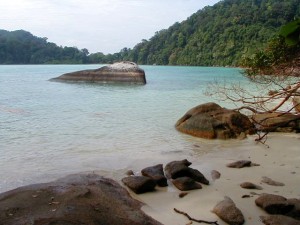 Surin Islands – The Mu Koh Surin National Park is situated in the Andaman sea about 60 km of the west coast of Phang-Nga Province in southern Thailand. The park covers an area of approx. 141.25 km2 including 108 km2 of the surrounding sea.

For many years the Surin Islands were an unspoiled group of islands, giving home to a small community of sea gypsies and offered shelter for local fishing boats during bad weather.  The group of Islands declared as the 29th National park of Thailand on 9th July 1981.

More about the Surin Island National Park on the Royal Forest Department Website.

This site is a submerged rocky ridge going roughly west to east from the east side of Koh Torinla, the most southern of the Surin Islands.

The ridge starts close to the island at about 12 metres going down to about 25 meters of the eastern end, the top of the ridge gets to about 7 meters. There is not much coral here but plenty of fish life, Moray Eels, Napoleon Wrasse, Humphead and Bumphead Parrot Fish and often a White Tip Reef Shark or an Eagle Ray.

There is good diving all around this island which is the northernmost island in the Surin group.

The southern and northern tips of the island are dominated by very large boulders, the western side is littered with large boulders and patches of Plate and Staghorn Corals, on the southern part of the west side just before you come to the massive boulders is very good place to find one or both of the resident Turtles. The eastern side is a hard coral reef Sloping down from about 5 meters in terraces to about 18 meters, here you’ll find many Lion Fish, Scorpion Fish,Butterfly and Angel Fish as well as Moray Eels. Look inside and under the coral heads and you’ll find Hawk Fish, Boxer Shrimp, Porcelain and Coral Crabs even some Spiny Lobsters.