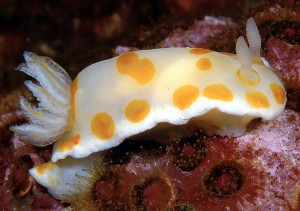 Nudibranch’s have many other names to differentiate the vast amount of species in this group of fascinating and most colourful little creature on the reef. Varying in size form almost microscopic to as big as a grown man’s fist,

Nudibranch’s are probably the most photographed none fish on Thailands reefs today.

Due to their slow moving nature and absolutely fabulous colouration these gastropods make excellent models for amateur and professional camera wielding divers alike.

These gastropods also include sea snails, sea slugs and sea hares in their classification and there are actually well over 40, 000 species of gastropods, with more being found every year. They eat using a radula, which has teeth and can be used to gather food into its mouth.

The word itself comes of course from the Latin source, Nudus. Nudus means naked and is combined with Greek word Branchia, which means gills. You may also notice that they have several tentacles on their heads. These tentacles help them feel, taste and smell their way around their reefs.

Nudibranches have a flat, broad muscle which is called a foot, like their land based counterparts they also leave a layer of slime where ever they travel. Nudibranch’s are typically found on corals reefs and sandy areas of the sea bottom. They can also swim short distances by flexing their muscles and fluttering through the water. This is an amazing sight to behold.

Nudi’s have quite poor eye sight if we compare it to our own and must rely on their tentacles to be able to feel and taste their way around the reef. It is known that they cannot see their own stunning colours, but they can distinguish between dark and light.

Their food is a mixture of algae and small sponges and corals, they can also eat fish eggs and other sea slugs too, though it has been remarked that they are quite fussy eaters. the Nudibranch’s actually get their stunning colouration form the things they eat, and it is also these colours which warn off potential predators. Nudibranches are poisonous to most fish.

Nudibranchs are hermaphroditic, having both sets of male and female reproductive organs; they still need to find a mate to reproduce because they still cannot mate with themselves. Once the eggs are ready to be laid they are deposited with a jelly like spiral coil, many divers will have seen these coils on the reefs and probably not paid a second thought to them.