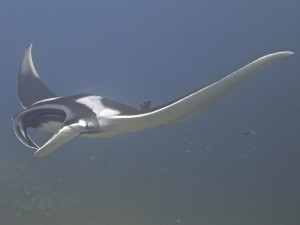 Scuba Diving in Similan Thailand – Koh Bon is an Island about one to one and half hours north east of the Similan Islands.

The Pinnacle is a hundred or so metres of the North West Corner of the Island. Not dived by many boats as it is very much and advanced level dive. The top of the pinnacle is at about 18 metres sloping down steeply to 40 metres on the North and 35 metres on the south.

The pinnacle is covered is primarily yellow soft coral, though there is a certain amount of variegation happening. There is plenty of small reef life to watch here but you’re really here for the big stuff. Huge groups of Giant Trevallies circle the rock and you’re often joined by the resident pair of Napoleon Wrasse but the real trick is to hover close to the top of the pinnacle and wait – Manta Rays and Eagle Rays are regularly spotted here.

This site is a submerged ridge sloping down to about 35 metres going west from the northern end of Koh Bon Bay. The start point of the dive is decided by the current. Starting in the bay you go straight to a coral garden on the sloping wall (12 – 20 metres), many Mantis Shrimp can be found here also look out for nudibrachs on the wall. If you start on the north side you’re on a rubble slop(10 – 25 metres) with large coral bommies and massive hard coral beds at around 22metres. Look here for huge Lion Fish and Trigger Fish as well as big groups of Bat Fish.

Either way you will head onto the ridge, careful not to go too deep as this will eat into your dive time. At around 22 metres there are two large areas of bare rock which is a good place to settle down to watch. Around the end of the ridge you’ll often see Blue Fin and Giant Trevallies, Pick Handle and Chevron Barracuda and if you’re lucky Manta Ray cruising along the ridge.

MV Oktavia is a Thailand liveaboard where families are welcome to cruise, dive and simply enjoy the tropical and exotic island destinations. Swedish owned and operated MV Oktavia is a comfortable and affordable scuba diving boat. The diving staff and crew are friendly and helpful in making the cruise a most memorable one.

The Junk  or also called June Hong Chian Lee. Spend your Similan Islands liveaboard diving holiday, discovering the most fantastic dive sites around Similan & Surin Islands, Thailand. You will have a great time a on board this authentic Thailand Liveaboard which is a real sailing Junk with a long history.