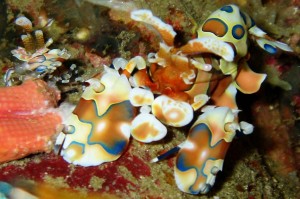 Harlequin Shrimp are one of the most sought after Photographic models of the undersea world. Make no mistake; you may have never heard about this little shrimp, but go onto any Thailand liveaboard and you will soon become familiar with the name.

These angelic looking little shrimp, which grow to no more than a few centimeters in length mate for life. They are detested in the starfish world. Harlequin Shrimp prefer the water temperature to be around 27 /30 degrees, and can be found in the warmer parts of the Pacific Ocean especially where this huge body of water meets the Indian Ocean.

This little shrimp has two oversized pinchers which it waves around as a warning to predators not to come to close. They also can extract toxins from their food which making it dangerous and toxic to eat, keeping predators away.

The female is slightly larger than the male.

The Indian Ocean Harlequin shrimp is typically a creamy white colour with a stunning pattern of purple and blue colour configuration with occasional spots. They have two walking legs on either side of its body and have the large pincher claws which they use with great success. The claws actually look quite flat and their eyes also seem to have been smoothed out too.

Harlequin Shrimp tend to move quite slowly, and can be found sometimes on shallower reefs; normally they hang out on small ledges out of any strong current. They feed primarily on starfish, which they will attack without mercury by cutting off one of its legs the shrimp will then take the leg back to its lair to feast on its bounty.

The shrimp tend to work in pairs, usually the male and female with the female being slightly larger than the male; she will also have abdominal coloured plates.

She can produce literally thousands of eggs per year, though this may depend more on the environmental conditions of the area they have inhabited.

The female tends to her brood until they hatch out then they are on their own much like most marine animals. Here in Thailand, the Harlequin Shrimp is a highly sort after prize amongst video and camera junkies. They make excellent models, if they can be found, as they do not run off too far.

They can be found on dive site like Hin Daeng and Richelieu Rock; they also adapt quite well to life in an aquarium, but do need to be looked after carefully. These beautiful creatures though are much more appreciated when you find them on the reefs.

They are not easy to find, one clue as to their whereabouts is, if you spot a freshly chomped on starfish with only four legs, then these little fellows are the most likely culprit, as starfish are their main diet.

After dissection of the starfish appendage, they drag the leg back to their hole, they will consume it quite quickly often killing the starfish. A starfish staple diet is corals, so these little guys do help the reefs with their hunting.