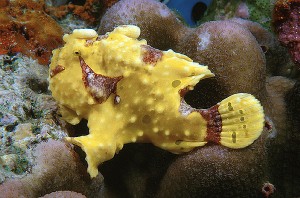 Frogfish – Anglerfish commonly known globally as a frog fish, the species is also known as the anglerfish in some countries. The frogfish is no relation to the frog at all and is a true fish, although a strange one at that.

Frogfish inhabit all tropical seas around the world with the exception of the Mediterranean Sea. They are quite a small stocky little fish which are excellent at camouflage. They use this skill not only to hide from predators but also to ambush their own prey.

There are many different species of the frogfish and most of which can change colour, some even cover themselves with other organisms to give them the ultimate disguise. They move incredibly slowly, that is when they actually do move at all. They tend to lay in wait for hours, waiting for just right moment when an unsuspecting poor critter swims by, then in a millisecond it is swallowed in a rapid no mercy strike.

Frogfishes are quite a broad looking fish in appearance, they are not very big in fact the largest is only a little over twelve inches while the smallest are in fact no bigger than a plum. Their bodies do not have the usual scaly appearance of other fish and are usually covered with bumpy features.

Their Mouths are pointed upwards giving them a frowning expression, in fact they really do look like are in a very bad mood all the time. Many are brightly coloured, such as bright yellow, reds, green and even black some are even spotted and some frogfish are several different colours. Usually they become the same colours as the surrounding reef; this is what makes them expert in camouflage.

Frogfishes eat small shellfish, and other fish, sometimes they will even eat another of the same species. When they first spot their potential prey the frogfish follow it never losing visual with its prey, then when it is within striking range usually a couple of body lengths away.

Approaching prey will not even notice the frog fish as it prepares to strike move very slowly getting itself ready then boom, it strikes extending its mouth out in a millisecond.

Once the prey is in the Frog fish mouth there is nowhere for it to go the water that came in alongside the prey is flushed out through the gills leaving the defenseless animal staring into a empty pit where it will slowly be consumed alive. The frogfish also has a a special muscle which keeps its esophagus closed allowing the prey no chance of escape.

Frog fish are notoriously difficult to find let alone photograph, however as they do not move too far. So if you find one on a reef make special note of exactly where it is and no doubt you should be able to find it again and again. If you are in search of one not knowing if there is one there or not then you really have your work cut out –good luck with that.

Here in Thailand they are prized asset to any dive site, unfortunately most dive guides keep this knowledge to themselves and do not reveal their findings to anyone. I once found one on Richelieu Rock, I was very close to corals and searching for anything macro in fact I think I was looking for either pipe fish or harlequin shrimp.

Then out of the corner of my eye something move very slightly away from me I must have gotten to near it for its own comfort. There is t was my own frog fish, I turned to my buddy to show them my findings and it took me another five minutes to relocate it such is there amazing concealment techniques.

Frogfish are a real macro hunters top prized souvenir make no mistake they are wonderful addition to any reef, just be careful where you are putting your hands next you are diving that piece of soft sponge or hard coral might not be what you first tough tit was.