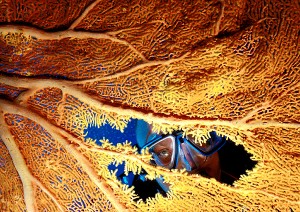 This Similan diving site is on the north tip of Similan Islands #7, again the name needs explaining. When the Islands were first given numbers islands five and six were considered one island so what is now island seven was island six, Hin Pusar (Elephant Head Rock) was at the time Koh Pusa and numbered as island seven, however a law was introduced in Thailand stating that and island had to have vegetation growing on it, this meant island seven was no longer an island. This caused a problem as Similan (in old Thai/Malay) means nine islands, so they had to find another island hence island five (the centre of which is submerged at high tide) was split into five and six and six was renumbered seven – however it was too late, the dive site had already been named.

The site itself is a pinnacle just a few metres off the northern tip of the island, a small part of the pinnacle breaks the surface, the base of the pinnacle on the northern end is at 30 metres sloping down from 12 metres at the south end. The central part of the dive site a huge boulder with other smaller but still very large boulders on top creating a number of swim throughs. More boulders around the central pinnacle create a series of channels which create homes for various corals (especially Green Tree Coral) and critters (Moray Eels, Lion Fish and Scorpion Fish). It is possible to see White-Tip reef Sharks, Travellies and Tuna coming into the rocks to hunt as they are a magnet to schooling fish.

The current will decide the route you take towards the end of the dive, heading south west you come into a sloping hard coral reef and then onto more boulders as you head onto West of Eden. Heading south east you have a terraced stag horn coral reef leading into a sandy bay. On the reefs you’ll find many small reef fish such as Neons and Chromies and there’s a good chance of finding Peacock Flounder in the sand.