Bluespotted Stingray swimming into the dark
Contact Us Now! 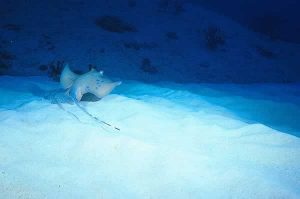 The Blue Spotted Stingray or Kuhl’s stingray as it is also called – depending on where you dive I guess- is a member of the stingray family and the stingray species is also a distant relative of the Shark family, as they both have a skeletons made from cartilage.

These fascinating fish can usually be found down on the sandy bottom just off the reef, so when diving near bottom, it is a good idea if you are so inclined, to venture a little way from the reef, and you might indeed find several lying waiting for their prey.

Being the opportunistic feeders that they are they can be quite difficult to spot. I usually look for a tail sticking out of the sand, as their tails have a black and white band around them, this does give them away, but you must look very closely indeed.

These rays, like I have previously mentioned love nothing more than to bury just underneath the sand. They are also found around rocky areas, as well as coral rubble, they also tend to be near old wrecks and are can be found at around 20-25m deep.

These rays typically feed on crabs, lobsters, small fish, mollusks, octopus and worms. Most reefs have an ample food supply to support quite a few of these rays. The Blue Spotted Stingray does not have teeth like many fish; it does have bony plates in its mouth, which it uses to crush its victims, after it has over powered them and pinned them to the bottom. 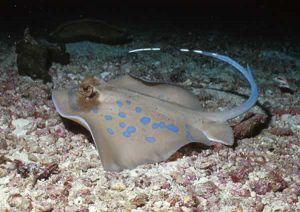 Blue Spotted Stingray have a long tails which half way down house two venomous spines. The tail is usually about twice the length of the body of the fish. The spines or barbs as they are really called are two different sizes, one being larger than the other.

This stingray has bright yellow eyes and they are positioned in such a way that they have an excellent field of view and can see from almost every direction possible. Like sharks, they have spiracles; these spiracles allow them to draw in oxygenated water and are located right behind the ray’s eyes.

If you were able to flip the ray over onto its back (not recommended) then you would see its mouth and gills. These particular rays tend to live alone, however not much is known about these fish after dark in the wild.

Blue spotted rays give birth to live young while they are inside the womb, the embryo is well nourished by the yolk and these eggs are retained by the female until they hatch. The blue spotted ray can produce around seven live young in every litter.

All Blue Spotted Stingray juveniles are born with the distinctive blue markings of its parents. When they are ready to mate the male ray will follow the female with his acutely sensitive nose close to her cloaca, he does this all the while waiting for a sign to tell him that she is now ready to mate.

The actual courtship (like many other rays and sharks) typically includes some sort of biting and grabbing of the main body of the fish. The teeth of the male are used to hold the female in place during copulation. The male fertilizes the female via internal fertilization through the use of their claspers, again as with all other members of this species. The gestation can be anywhere from 4 months to a year. It is recommended to give members of this classification a wide birth if you think that they maybe mating, they might not like to be disturbed.